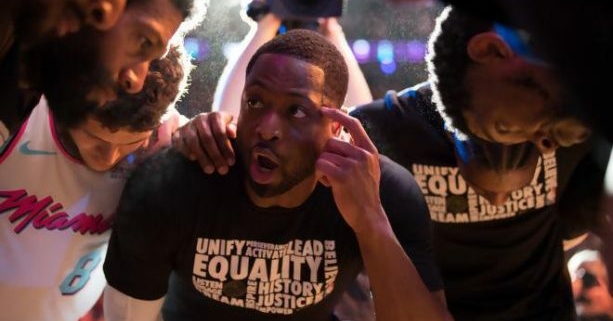 On Sunday night, Dwayne Wade arrived at Kiki on The River.

Accompanied by a group of male friends (Gabby Union was not in attendance), and was greeted with a standing ovation by guests and owner Roman Jones when he arrived for dinner. The DJ honored Wade by playing a mix of DJ Khaled and Rick Ross songs, shouting out “can you feel the love, Dwayne Wade??”. Holding court at a riverside booth table, Wade feasted on roast chicken and a seafood tower and toasted his friends with several bottles of Ace of Spades champagne. [he declined photos].

Earlier in the day, Kiki on The River’s Sunday Funday started off with an early lunch with Ivana Trump.

Arriving by yacht with a group of female friends at 2 pm, Ivana lunched on lobster, Greek salad and sipped Rose as she based in the sunshine and chatted up friends. Wearing her signature updo and a powder blue shirt and top, Ivana gushed to Kiki staff that she loved the restaurant and it felt “just like the Greek Islands.” Miami just feels right again with Wade back where he belongs.

Want to join the discussion?
Feel free to contribute!